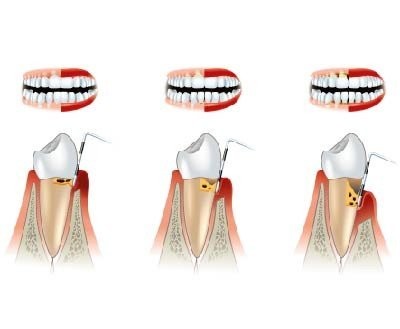 Periodontology is a branch of dentistry that deals with the health of the teeth, jaw bone, the gingiva that surrounds it completely and the tissues of the mouth.

What are the symptoms of gingival disease ?

Periodontal diseases are one of the most common diseases that dentists encounter. Inflamed gingiva appears swollen and redder than usual. In the combination of teeth and gums, there is a lot dental calculus, and mostly in progressive diseases, gingival recession has started. Migration of teeth, mobility, lengthening and opening between the teeth are symptoms of the disease. Smoking, genetic factors, excessive stress, drug use, pregnancy, hormonal changes, grinding or clenching of the teeth, advanced diabetes, treatments such as poorly made filling and bridge prosthesis cause problems in the gingival.

How are gingival diseases treated?

In gingival diseases, if the inflammation remained only in the gums before reaching the jawbones, the gums can be restored by the patient's oral care together with a good dental calculus cleaning.

If the disease has progressed to the jawbones and occurred in the gaps between the gum and teeth we call periodontal pockets, curettage treatment, which is the further treatment option, should be performed. In some cases,  in addition to this,  periodontal flap surgery may also be required.

How are dental calculus formed?

Dental calculus is white, brown or black colored structures formed by the combination of structures and bacterial organisms in the saliva when the oral care is not paid sufficient attention. Primarily, it has a softer structure called bacterial plaque, but subsequently hardens and becomes a structure that does not remove even with brushing.

Is it harmful to have dental calculus cleaned?

Having dental calculus cleaning done is not harmful if necessary because as long as the dental calculus are in the mouth, it increases the involvement of the bacteria that cause inflammation.

Gingival enlargement may be due to inflammation caused by dental calculus, however, incorrectly made denture prosthesis, fillings, hormone drugs, blood pressure medications may also cause gingival enlargement.

Gingival recession may occur  after tissue loss with advanced gingival  disease or it may occur in cases such as wrong brushing, grinding or clenching of the teeth.  Receding gums do not replace themselves, however, gums can be restored thanks to biomaterials taken from the patient's own palate or available.

How can I keep my gums healthy ?

First, the right toothbrush and paste should be selected. The correct brushing technique should be applied with a soft-bristle toothbrush. Then, the interface of the teeth should be cleaned with dental floss or an interdental brush. Finally, oral care is ended with mouthwash. These procedures should be repeated at least 2 times a day. Even if no problems are felt, dentist checks should be made regularly for 6 month periods.

What is a pink aesthetic ?

While laser is defined as a non-ionizing light, it is an electromagnetic energy with a different structure that is not harmful, such as x-ray emitting radiation. The biggest advantage of laser treatments is that they can achieve beautiful results by showing heal in a short time without any pain.

Who can laser be applied to?

Laser treatment can be used in children, pregnant women and all individuals with general systemic disease when appropriate wavelengths are arranged.

What are the laser applications in dentistry?

Soft tissue lasers are most commonly used in dentistry. These are the diode lasers used in the gingivals. Pink aesthetics applications offer patients a faster healing process and a painless treatment. These procedures include gingivectomy, gingivoplasty, frenectomy, pocket contamination that helps curettage therapy, and herpes labialis treatments. Laser treatment can also be applied to aesthetically change the purple color of the gingivals to pink color. There are also procedures to apply as a desensitizer for extremely sensitive teeth.

Is teeth whitening done with the use of laser?

Beautiful smiles can be achieved by obtaining effective results in a short time by using laser treatments in teeth whitening processes which are among the aesthetic applications.